Infrastructure Bill: It's Go Time for Radical Self Custody 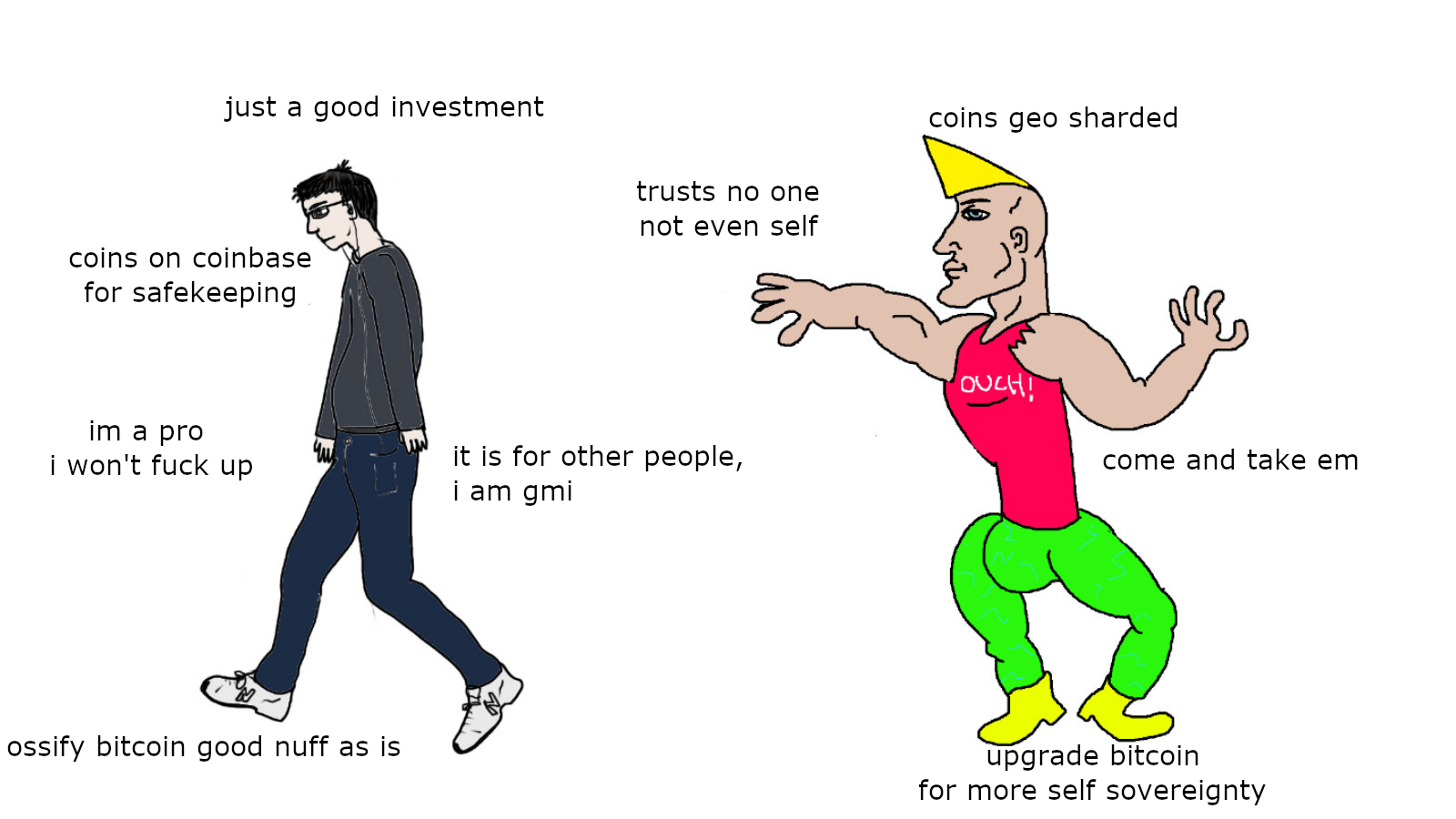 The infrastructure bill draft has been circulating which contains language that would have massive impact for the crypto ecosystem (and Bitcoin) in the United States, and most likely globally. The broad implication of the proposed bill is that many types of service provider would be categorized as brokers, even if fully ‘non custodial’. E.g., a coinjoin coordinator might be a broker, even if they never take control of the funds, because they are facilitating a transaction. There’s a lot of nuance, and the language is still being changed, so we’ll see where it lands. But that’s not the point of this blog post.

While there’s space for debate around perfect designs and optima for protocol improvements, these discussions take years to turn into code running in end users wallets. I do not believe that we have time to leisurely improve self-sovereign custody solutions while regulators figure out a wrench to throw in our spokes.

Why am I so concerned about this bill in particular? A confidential source tells me that this language came out of the blue, an executive branch driven regulatory ninja attack of sorts. Normally, when the government looks to regulate an industry, the provisions and terms get floated around by legislators for a long while with industry input, comment periods, and more. Then, when a bill or other rules get passed, it’s something that the industry has at least had a chance to weigh in on and prepare for. My source claims no one has seen the clauses in the infrastructure bill before, and they infer that may mean this is a part of a broader crack-down coming from specific political personalities and agencies. This means we may be seeing government actions further restricting users’ rights in the pipeline much sooner than anyone could anticipate.

I’ve long been saying that we should be deploying BIP-119 CTV for congestion control before we see broad congestion on the network. If you wait until a problem is manifest, it can take years to deploy a solution. This merits proactivity in solving a problem before it comes. Today, the need to improve self-custody looms urgently on the horizon.

CTV is not a panacea solution. It doesn’t magically fix all custodial issues. But, along with Sapio, it does offer a pathway to dramatically improving self custody options, letting users customize vault smart contracts which do not depend on any third parties. Deploying CTV now is an opportunity to put in motion the wheels for broad ecosystem support for these enhanced custody protocols. We may come up with better options in the future which may obsolete CTV in place of more clever technologies. I cheer those efforts. But we need solutions for Tomorrow.

A soft fork activation for CTV could be deployable for Bitcoin imminently, should the community embrace it. The spec is nearly 2 years old, the code has required only small updates to be mergeable with other changes to Bitcoin Core. The review burden is 185 lines of consensus code, and a couple hundred lines of tests. To that end I believe it is prudent for the Bitcoin community to embrace the deployment of CTV and I’m calling on the community to soft-signal intent for a soft-fork activation of CTV.

We cannot control what rules state authorities attempt to mandate. But we can individually control our own compliance with measures we see as unjust, and as a community we can advance technologies and solutions that ensure that choice remains squarely in the hands of every user and not the service providers they may use.