This post draws heavily from Zmnscpxj’s fantastic post showing how to make drivechains with recursive covenants. In this post, I will show similar tricks that can accomplish something similar using ANYPREVOUT with a one time trusted setup ceremony.

This post presents general techniques that could be applied to many different types of covenant.

note: I originally wrote this around May 5th, 2022, and shared it with a limited audience 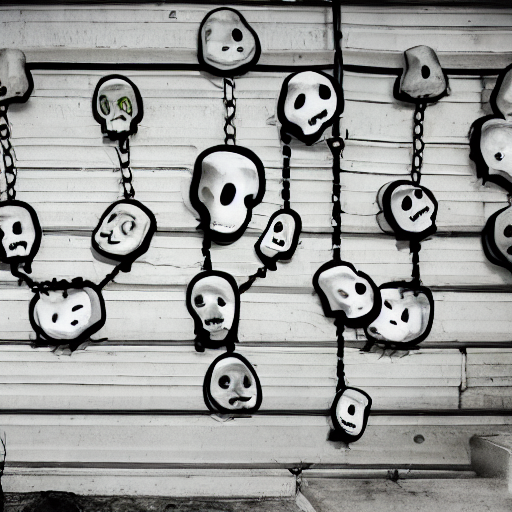 The first component we need to build is a Peano counter graph. Instead of using sha-256, like in Zmnscpxj’s scheme, we will use a key and build a simple 1 to 5 counter that has inc / dec.

Assume a key K1…K5, and a point NUMS which is e.g. HashToCurve(“Spookchains”).

For each Ki, when i < 5, create a signature that covers a transaction described as:

For each Ki, when i > 1 The second signature should cover:

Are these really Peano? Sort of. While a traditional Peano numeral is defined as a structural type, e.g. Succ(Succ(Zero)), here we define them via a Inc / Dec transaction operator, and we have to explicitly bound these Peano numbers since we need a unique key per element. They’re at least spiritually similar.

Publish a booklet of all the signatures for the Increment and Decrement rules.

To create a counter, simply spend to output C:

Which can then transition to (+1):

Which can then transition (-1) to:

This can repeat indefinitely.

One issue with the design presented previously is that it does not handle arbitrary deposits well.

One simple way to handle this is to instantiate the protocol for every amount you’d like to support.

This is not particularly efficient and requires a lot of storage space.

Alternatively, divide (using base 2 or another base) the deposit amount into a counter utxo per bit.

Instead of using keys K1...KN, create keys K^i_j, where i represents the number of sats, and j represents the counter. Multiple keys are required per amount otherwise the signatures would be valid for burning funds.

For each K^i_j, it may also be desirable to allow splitting or joining.

Splitting can be accomplished by pre-signing, for every K^i_j, where i!=0, with SIGHASH_ALL | SIGHASH_ANYPREVOUT:

N.B.: Joining allows for third parties to deposit money in externally, that is not a part of the covenant.

The splitting and joining behavior means that spookchain operators would be empowered to consolidate UTXOs to a smaller number, while allowing arbitrary deposits.

One Vote Per Block

To enforce that only one vote per block mined is allowed, ensure that all signatures set the input sequence to 1 block. No CSV is required because nSequence is in the signatures already.

When a counter reaches the Nth state, it represents a certain amount of accumulated work over a period where progress was agreed on for some outcome.

There should be some viable state transition at this point.

One solution would be to have the money at this point sent to an OP_TRUE output, which the miner incrementing that state is responsible for following the rules of the spookchain. Or, it could be specified to be some administrator key / federation for convenience, with a N block timeout that degrades it to fewer signers (eventually 0) if the federation is dead to allow recovery.

This would look like, from any K^i_j, a signature for a transaction putting it into an OP_TRUE and immediately spending it. Other spookchain miners would be expected to orphan that miner otherwise.

From a state K^i_1, the transaction transitioning to K^i_2 can be treated as ‘special’ and the OP_RETURN output type can be used to commit to, e.g., the outputs that must be created in when the Terminal State is reached. This clarifies the issue of “what is being voted on”.

This method does not lock in at a consensus layer what Terminal State is being voted on.

In certain circumstances, without violating the one-time-setup constraint, if a fixed list of withdrawer’s addresses is known in advance, the Open States could cover withdrawals to specific participants, which then must collect a certain number of votes from miners. However, it seems impossible, without new primitives, for an arbitrary transaction proposal to be voted on.

Instead of using randomly generated keys for each state, define each to be an xpub and derive a path where it is k/i/j for each state/satoshi amount. This saves some data, and also requires less entropy.

commit to the hash of the entire program spec as a tweak to the xpub, so that someone can quickly verify if they have all the signatures you are expected to generate if honest.

One way to do this is to convert a hash to a list of HD Child Numbers (9 of them) deterministically, and tweak the xpub by that. This is a convenient, yet inefficient, way to tweak an xpub because the child has a normal derivation path for signing devices.

A single party pre-signs all the transactions for the spookchain, and then deletes their xpriv.

You trust them to have deleted the key, and signed properly, but you do not trust whoever served you the spookchain blob to have given you all the state transitions because of the trustless data commitment.

Define a MuSig among all participants in the setup ceremony, N-of-N.

Now you simply trust that any one person in the one-time-setup was honest! Very good.

Allow for unaggregated multi-sig keys in the spec. This grows with O(signers), however, it means that a-la-carte you can aggregate setups from random participants who never interacted / performed setup ceremonies independently if they signed the same specs.

Can also combine multiple MuSig Multi-Parties in this way.

This is nice because MuSig inherently implies the parties colluded at one point to do a MuSig setup, whereas unaggregated multi-sig could be performed with no connectivity between parties.

Suppose a spookchain becomes popular. You could configure your client to reject invalid state transitions, or restrict the spookchain keys to only sign with the known signatures. This soft fork would smoothly upgrade the trust assumption.

This would look something like the following for state i:

The advantage of such an optimization is theoretically nice because it means that only the non-destructuring recursive part of the computation is subject to the one-time-setup trust assumption, which might be of use in various other protocols, where recursivity might only be unlocked e.g. after a timeout (but for spookchains it is used at each step).

A compiler writer might perform this task by starting with an arbitrary abstract graph, and then removing edges selectively (a number of heuristics may make sense, e.g., to minimize reliance on one-time-setup or minimize costs) until the graph is a Directed Acyclic Graph, consisting of one or more components, compiling those with committed covenants, and then adding the removed edges back using the one-time-setup key materials.

Commentary on Trust and Covenantiness

Is this a covenant? I would say “yes”. When I defined covenants in my Calculus of Covenants post, it was with a particular set of assumptions per covenant.

For emulations that are pre-signed, like the varieties used to emulate CTV, it is a different model because if your program is correct and you’ve pre-gotten the signatures for N-N it is 1-N honest (only 1 party must be honest to prevent an invalid state transition) and unkillable (all parties can safely delete keys).

I model these types of assumptions around liveness and honesty as different ‘complexity classes’ than one another.

What I would point out is that with the counter model presented above, this is entirely a pre-signed 1-N honest and unkillable covenant that requires no liveness from signers. Further, with APO, new instances of the covenant do not require a new set of signers, the setup is truly one-time. Therefore this type of covenant exists in an even lower trust-complexity class than CTV emulation via presigneds, which requires a new federation to sign off on each contract instance.

With that preface, let us analyze this covenant:

1) A set of sets of transaction intents (a family), potentially recursive or co-recursive (e.g., the types of state transitions that can be generated). These intents can also be represented by a language that generates the transactions, rather than the literal transactions themselves. We do the family rather than just sets at this level because to instantiate a covenant we must pick a member of the family to use.

2) A verifier generator function that generates a function that accepts an intent that is any element of one member of the family of intents and a proof for it and rejects others.

The verifier generator is the simple APO CHECKSIG script.

3) A prover generator function that generates a function that takes an intent that is any element of one member of the family and some extra data and returns either a new prover function, a finished proof, or a rejection (if not a valid intent).

The prover generator is the selection of the correct signature from a table for a given script.

Run the prover generator with the private keys present once to initialize over all reachable states, and cache the signatures, then the keys may be deleted for future runs.

At a given key state the only things that may happen are signed transactions, no other data is interpreted off of the stack. Therefore there is perfect impedance match.

5) A set of assumptions under which the covenant is verified (e.g., a multi-sig covenant with at least 1-n honesty, a multisig covenant with any 3-n honesty required, Sha256 collision resistance, Discrete Log Hardness, a SGX module being correct).

Uniquely, that during the setup phase at least one of the keys were faithfully deleted.

The usual suspects for any bitcoin transaction are also assumed for security.

The Terminal State can pay out into a pre-specified covenant if desired from any other family of covenants.