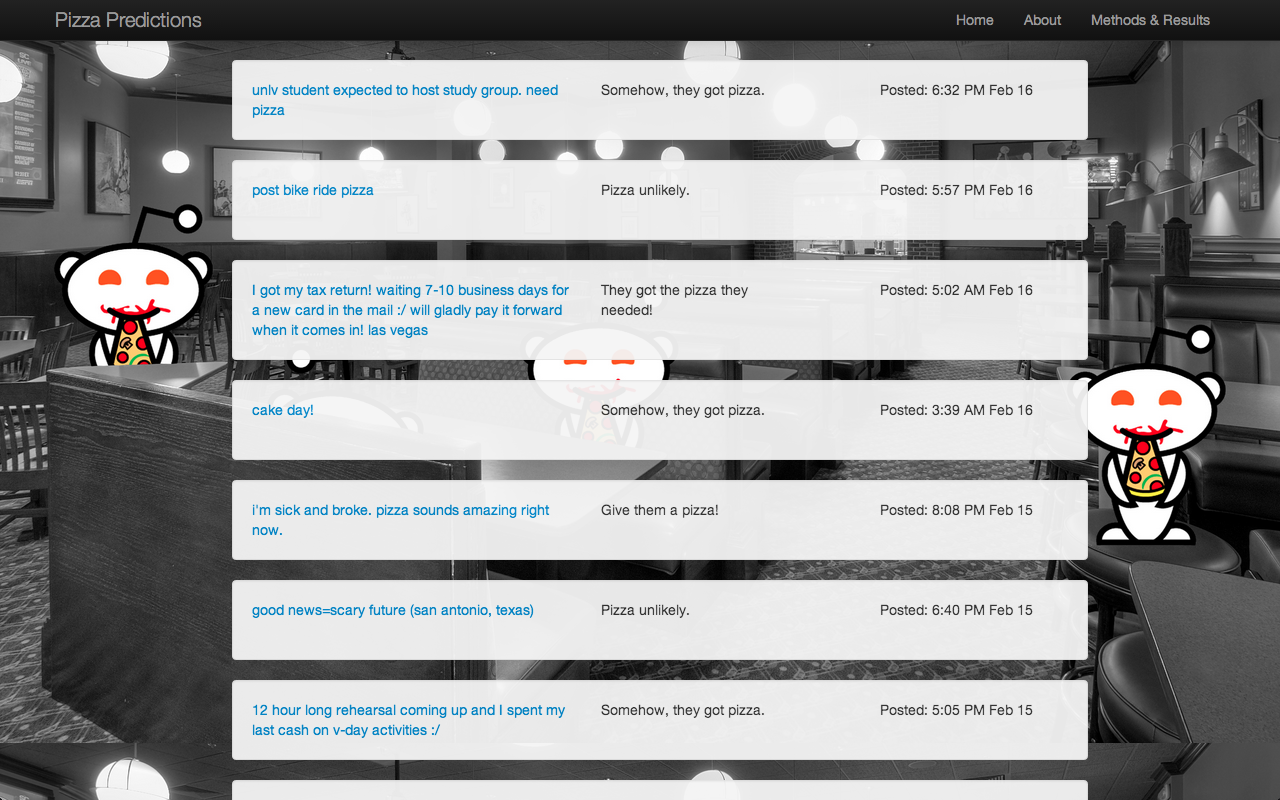 This past semester, I have been working on a project (viewable here) for my Comparative Media Studies (CMS) independent study with Chris Peterson (CMS.603 class). Chris is a fantastic mentor, and I will be TA’ing a class on Reddit for him this spring.

The focus of this study is a subreddit known as Random Acts of Pizza (RAOP) . RAOP is a quite interesting community; the basic premise is that redditors post with their current situation, and why they deserve/would really like a pizza. Then, generous community members will order them a pizza. The reasons asking for a pizza could be anything from sob stories to wanting to celebrate but being tight on cash. On the main page, you can see the titles of recent posts.

RAOP is a really fascinating idea. Strangers empathizes with each other on the internet, exchanging more than just text. Before I started doing the independent study, I toyed with the idea of predicting who would get pizza’ed. When a class conflict forced me to drop another class, I saw the perfect opportunity to do this study as a part of my humanities concentration in CMS. So I set out doing some preliminary research on the topic and designing my model.

The demo provides the RAOP community with an automated predictor to surface deserving posts. Throughout the semester, I considered several different demonstrations, including likely to get pizza post generation, but I determined that such formats would be damaging to the community, whereas the chosen demo is potentially helpful. It is important to note that the algorithm may be wrong and does not reflect my personal sentiments – any labels reflect analysis on the community’s prior actions performed by a computer. For example, if someone posted “I am a hungry neo-nazi and…”, the models would not necessarily be able to filter on this fact alone, as the word “nazi” would likely be the only one in the data set, and would be filtered by threshold. Throughout the project, I tried to keep my code as agnostic as possible to Reddit itself, such that it may be useful for analyzing other text-based interactions. To that extent, I plan to release my work under an unrestrictive license in the coming weeks.